Izizwe Volunteer Projects is a registered non-profit which aims to uplift the Gqebera Township in Port Elizabeth, South Africa, also known as Walmer Township, by establishing partnerships with community groups, including Walmer High School, Walmer Primary School and local creches as well as implementing programs for the local youth to partake in. 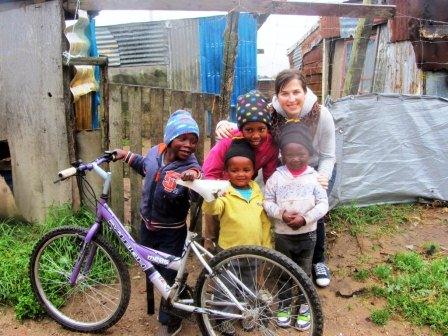 The mission of Izizwe Projects is to revitalize community-centered organizations in the township, while also providing opportunities for international volunteers to learn about Xhosa and township culture, and to teach people about their own native cultures.

Since 2008, Izizwe has strengthened these community groups by providing financial assistance and facilitating volunteers from countries such as Britain, Germany, Netherlands, and the United States. Formally registered as a South African NPC in January 2012, Izizwe Projects is looking to expand its impact on the township by developing more projects and more local involvement.

The impact of Izizwe Projects has also been demonstrated by coordinating revitalization projects, holiday programs, and after-school activities. In July 2012, Izizwe Projects helped replaced the dirt, rock-ridden classroom at Sunnyside Day Care, which had over 30 kids, with a paved, child-friendly floor.

That same year, at the Sinethemba and Khanya creches, volunteers renovated their classrooms and painted their walls. In 2012, Izizwe helped establish a Homework Club at the Walmer Primary School, and organized a three-week holiday program for the township’s youth, which featured arts and crafts, a recycling contest, and fitness activities, attracted over 250 kids each day. In 2013 Izizwe Projects partnered with Walmer High to instill physical education after-school, and to create soccer and rugby teams for boys and girls.

Izizwe is currently expanding its projects to a full time sports program offering boys and girls after school sports activities, a dance project bringing traditional dancing into the creches and schools and continued extending our very successful holiday programs during school holidays.